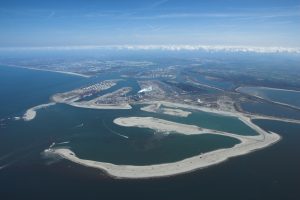 MAASVLAKTE 2 has become in shape. Queen Beatrix of the Netherlands launched the names of the then future docks at the portland reclamation. A few years later she closed the sea defense officially

The construction of 1,000 hectares of additional docks and terminals started on a sunny, but windy day in early September 2008 with what is called ‘the first plunge’ (of sand) for Maasvlakte 2, after 15 years of discussion and legal procedures.

Janny and her husband Jaap spotted the then-recent state of affairs up in the air on returning home from their trip in South Africa. At the time, the visibility was clear enough to take a picture. The first fully automated terminals have become operational in stages, that have been tested on security, reliability, and stability one by one.