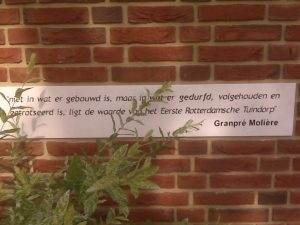 Vreewijk the oldest but one garden ‘city’ in the Netherlands – should be cherished. Architect Grandpré Molière designed part of the houses, early 20th century. His statement about Vreewijk can be found on a plaque. It says (in Dutch): The value of the 1st Rotterdam garden village is not in what has been built, but in what has been ventured, persevered and defied!

Inhabitants of Vreewijk are well aware of that. They keep on campaigning to preserve the typical Garden City features but find time to celebrate as well.  In 2016 all involved in the Rotterdam Garden City look-alike celebrated 100-year Vreewijk. Please listen to the Vreewijk song, composed and sung by Joyce Turek and Marjan de Wilt. They sing about the garden district’s history, and its current features: “where the birds overwhelm city noises”. Please listen to the evidence. Facebook.com/tuindorpvreewijk and Facebook.com/ondernemendvreewijk unveil more.

Previous Post: Surprise, surprise: personal words from Janny herself
Next Post: Maasvlakte 2 showpiece of the port of Rotterdam