I can be followed on Twitter and other social media, such as YouTube, Facebook, Pinterest and LinkedIn (as mentioned elsewhere). I’m a native speaker of Dutch, but use two languages in communication and writing: Dutch and English. The picture with me and a lady London borough dignitary in London’s City Hall is evidence that my heart is partly in London and environments, and party in Rotterdam, but also in the rest of the EU and in South Africa. 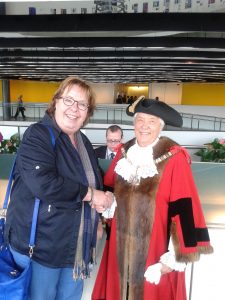 Please find me nicknamed as harbourexpert on Twitter, on Facebook under my own name and on YouTube  https://youtu.be/qaabrmCLgS0 (as the world infamous shipping correspondent in Rotterdam 🙂 harbourexpert.simplesite.com unveils thoughts, analyses, comments and a book’s prelude titled Schaken Tegen de Dood (Playing Chess Against Death). The texts reflect experiences with what appeared to become a deadly disease.